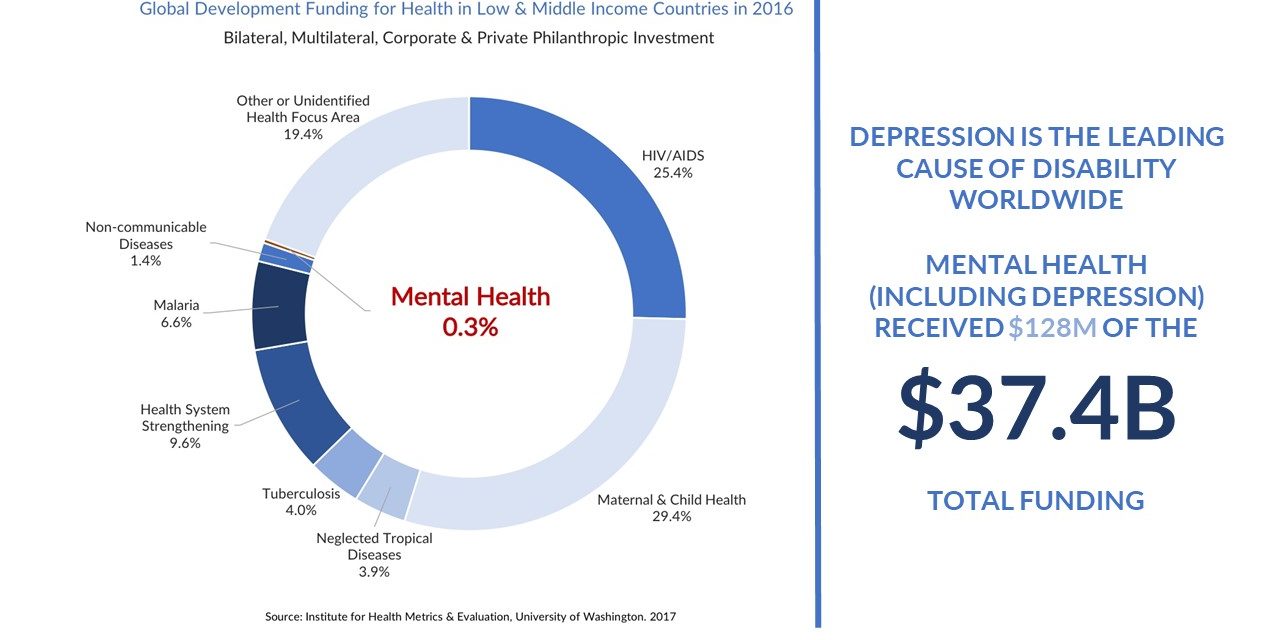 In April 2017, the Institute for Health Metrics & Evaluation at the University of Washington released its seminal annual report on development funding for health in low and middle income countries.

The report summarizes all bilateral, multilateral, corporate and private philanthropic investment into health throughout the prior calendar year. It also breaks out funding by health focus areas such as maternal health, HIV/AIDS or malaria.

In 2016, there was a total of $37.4 billion of development funding invested into health in low and middle income countries. The focus areas of HIV/AIDS, maternal health and child health consumed more than 50% of the total funding, with other key funding streams including malaria, tuberculosis, neglected tropical diseases and health system strengthening receiving smaller but still significant portions of funds. Mental illnesses collectively received 0.3% of total funding in 2016, equivalent to $128 million. Depression specifically, received a smaller subset of that, though the exact figure for depression alone was not established in this report.

Despite depression being the leading cause of disability worldwide (quantified by the measure: disability adjusted life years [DALYs]), it receives one of the smallest portions of funding by health focus area.  By way of like-for-like comparison, HIV/AIDS receives about $144 per DALY while mental illness receives $0.85 per DALY.

Funding mental illness and StrongMinds’ depression intervention remains a key challenge as we execute our 3-Year Plan to treat 100,000 women. Central to that is advocating for mental health as a critically underfunded area of development funding in health, and securing new partners through a diverse funding pipeline, comprising foundations, bilateral grants, multilateral grants and private philanthropic partners.

The Future of Mental Health Care Might Lie Beyond Psychiatry
November 28, 2022

Go to Top
StrongMinds uses cookies on our website to give you the most relevant experience by remembering your preferences and repeat visits. By clicking “Accept All”, you consent to the use of ALL the cookies. However, you may visit "Cookie Settings" to provide a controlled consent.
Cookie SettingsAccept All
Manage consent

This website uses cookies to improve your experience while you navigate through the website. Out of these, the cookies that are categorized as necessary are stored on your browser as they are essential for the working of basic functionalities of the website. We also use third-party cookies that help us analyze and understand how you use this website. These cookies will be stored in your browser only with your consent. You also have the option to opt-out of these cookies. But opting out of some of these cookies may affect your browsing experience.
Necessary Always Enabled
Necessary cookies are absolutely essential for the website to function properly. These cookies ensure basic functionalities and security features of the website, anonymously.
Functional
Functional cookies help to perform certain functionalities like sharing the content of the website on social media platforms, collect feedbacks, and other third-party features.
Performance
Performance cookies are used to understand and analyze the key performance indexes of the website which helps in delivering a better user experience for the visitors.
Analytics
Analytical cookies are used to understand how visitors interact with the website. These cookies help provide information on metrics the number of visitors, bounce rate, traffic source, etc.
Advertisement
Advertisement cookies are used to provide visitors with relevant ads and marketing campaigns. These cookies track visitors across websites and collect information to provide customized ads.
Others
Other uncategorized cookies are those that are being analyzed and have not been classified into a category as yet.
SAVE & ACCEPT